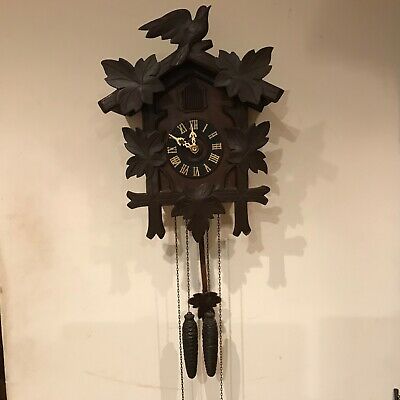 Do you own a genuine German cuckoo clock and want to know its value? Let’s begin with the good news: if your Black Forest Cuckoo Clock is a genuine antique, you’ll be thrilled to know that it could fetch anywhere between $150 to a cool $3,000; so checking its authenticity and features before you put a price on it would be one hugely-clever move! Here’s a list of things you could look for:

If your clock has been manufactured in the Black Forest (BF) or Schwarzwald as it is also known, you’ve plenty of reason to celebrate because this region is home to the best cuckoo clocks in the world, including your own! For almost three-hundred years, its woodcarvers and clockmakers established and maintained the fabulous standards of excellence by which these clocks are measured.

Check for the name of the manufacturer. The most renowned makers of Black Forest cuckoo clocks are August Schwer, Hurbert Herr, Rombach & Haas (Romba), Hones (Hoenes and Hones), Anton Schneider, Hekas (Helmut Kammerer), and Trenkle Uhren. If you’ve got one that’s made by any of these manufacturers, CONGRATULATIONS!  You are the proud owner of one of the finest and most beautiful creations in the realm of clocks.

But, hold on a second. With so many cheap imitations out there, is there a way of knowing that yours is the “real thing”? Yes, there is–it should have certification from the Black Forest Clock Association known as VdS or Verein dieSchwarswalduhrits. This certifies that your timepiece is a genuine Black Forest creation. What’s more, it guarantees that the components, mechanics, and construction are of the excellence and tradition that the region is famous for. A Black Forest clock is considered an original only if it’s got VdS certification. You should check the back of your clock to see if it contains a VdS serial number which would, in turn, help any potential but cautious buyer to verify your clock’s manufacturer.

Buyers and collectors tend to gravitate toward certain styles of cuckoo clocks, so figuring out the style of yours might help. Demand seems to be weighted toward the Traditional (also known as the Classic or Carved) style, and Chalet style clocks. Traditional clocks feature wildlife, hunting, and nature, and Chalet clocks are more to do with figurines and detailed carvings. But don’t underestimate the demand for styles like Vintage Reproduction clocks or Railroad House clocks which are also healthily sought-after items. You may also be the possessor of the Shield style which is the oldest version of the clock, or the Modern style which consists of the latest editions. These too certainly have their own niche markets.

The next step is to understand the importance of your cuckoo clock’s movement. Original BF clocks have a mechanical clock movement ( yes, there was life before batteries!). It will be useful to know the two types of manual winding they operate by. One is called the 1-day movement ( daily winding), and the other is the 8-day movement (weekly winding). The second category fetches a better price because of the superior quality of its parts. Quartz cuckoo clocks, on the other hand, are considered the poor cousins of mechanical ones. They may save owners some elbow grease, but you can be sure that these battery-powered versions are from manufacturers who have compromised on the quality or standards of Black Forest clocks, or, they could be cheap copies. Remember that the quartz versions are NEVER given VdS certification.

Let’s progress to your clock’s animation. Apart from the cuckoo bird, does your clock have other moving characters like woodcutters or a pair of lovers? The number of characters in your clock and the level of animation can affect its price because the more figures or detailed carvings there are mean that there’s been greater time and skill invested in it. Similarly, musical clocks are more expensive than non-musical ones, and the more the number of notes or tones your clock can play the higher the price you could expect. Just to give you an idea of the number of tones you could listen out for–most clocks range from 18 to 36 notes. How does yours rate?
Ultimately, your clock’s working condition, size, and appearance too will significantly impact its final price, but we hope that this checklist would help you begin the process of figuring out the true market-worthiness of your Black Forest cuckoo clock.